After two years of obstacles, I have finally managed to get to Sydney, extract the hard drives from my dead PC, get them to Canberra and borrow a caddy to see if the data survived.
It had.
I now have recovered all my Skulldred source files and art.  I had a bit of a cry, backed them all up and am shortly gonna cloud the shiznit out of it all.
Posted by Delaney King 10 comments:

Over the coming months I will be building a Kickstarter to allow me to focus solely on Skulldred and bring it to publication.
As you may know, life has been an unending series of challenges for me over the last three years, and my focus has been on finding housing and full time work.  Sadly, the Australian games industry just hasn't been able to deliver, and political situations overseas have made it impossible for a woman like me to relocate to where the industry is more healthy.
Having resurrected the project for GXAustralia and received a huge support via Twitter, I have realized that this is a special opportunity.  By focusing on a kickstarter, I can be able to raise the money I need to put a roof over my head and work full time for a few months on bringing this game, it's expansions and miniatures to life.  It should be sufficient to turn my life around.

So I thought I would start with some penciled in goals- love to hear your thoughts in the comments:

Things I know I can achieve without physical studio space:


Its buggy, with typos and yeah... I don't care because it is 3am and I jump on a bus in a few hours to get to Sydney.  Here... take it, print it, play it, have fun and don't whinge about the crappiness until I get a chance to fix it.  Yes, the forces are not balanced- I didn't have time to set up the scenery cut outs and did I mention I am exhausted?  bkwgfequwegfuwegfouwqegfuwgqefwannasleeeeep 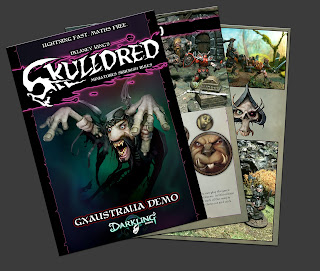 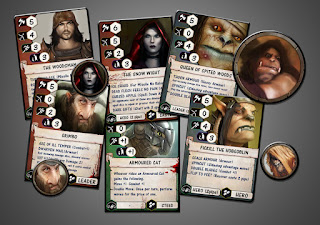 ERRORS IN THIS EDITION:

Wildsides
So I just noticed that the entire wildside page is missing entirely from this build.

It works like this- on a 'wild' roll, your model performs its wildside action (bottom left of card).

Any model within near range of a hero or leader is inspired and instead read their wild as 2 or 3 pips respectively.
A model within far range of a leader who can draw line of sight to them also gets 2 pips on a wild as they are under command of that leader.  Downed Leaders and Heroes do not inspire or command, funnily enough.

Sample wildsides provided in demo are;

Lock up - model loses activation. If engaged in combat, disengage- if you cannot do so, roll 1 critical hit die.
Vanish- model dissapears back to the dark realm it came from, cackling as it goes.
Blind Fury- make 1 move action towards nearest model and attack it- friend or foe.  If two or more models are equal distance, Roll die to determine which player gets to decide which is chosen- on a hit- owning player, on a miss, opponent.

The full rules have dozens of wildside options, each giving you more points the more terrible!  Advanced rules include terror- which blocks inspiration and command, standard bearers and musicians which chain command from a leader to distant models and spells which impose wildsides on heroes and leaders.

RELOADING
If a weapon is marked as 'reload', place a reload counter next to the model or on its profile card.
A reload action takes 1 pip.

Some weapons require 2 pips worth of reloads- they get two reload counters on their card.

JAM
When any ranged weapon rolls zero hit dice, it has jammed or it requires some attention before it can fire again.  Place a reload counter on it. 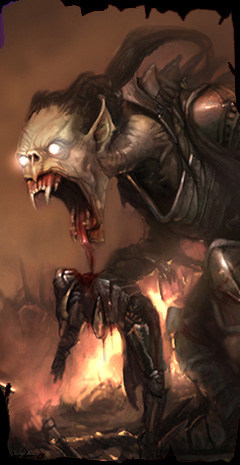 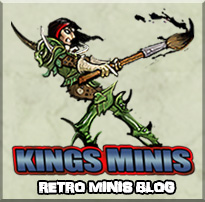